FERROVIAL CONTINUES ITS EFFORTS TO OFFER SERVICES AND INFRASTRUCTURES THAT RESPOND TO CHALLENGES SUCH AS CLIMATE CHANGE, WATER FOOTPRINT MANAGEMENT, THE ENERGY CRISIS, THE REUSE OF WASTE AND THE LOSS OF BIODIVERSITY, TO CREATE VALUE BY REDUCING THE ENVIRONMENTAL IMPACT AND DISCOVER NEW BUSINESS OPPORTUNITIES.

The ratification of the universal agreement against climate change, the Paris Agreement, confirms the commitment of governments to limit the increase in global warming to below 2 °C at the end of the century compared to pre-industrial levels. Most of the countries where Ferrovial operates have ratified their emission reduction commitments, which is why an acceleration of the process for the decarbonization of their economies is expected, which will generate new opportunities.

The strategy and climate governance is integrated into Ferrovial’s business strategy. Technological advances, a commitment to innovation, to energy efficiency, the source of energy from renewable sources and an increase in their weight in electric mixes to the detriment of fossil fuels are essential elements to take on the environmental commitment to reduce own emissions and those of customers and users of products and services.

In this sense, Ferrovial has become a strategic partner in achieving the targets of mitigating emissions and adapting to the effects of climate change by providing solutions through its low carbon business models: mobility of people (Managed Lanes on toll roads and car sharing), energy services, smart cities, water, circular economy and adaptation of infrastructures.

Ferrovial’s climate strategy has been awarded once again by the Carbon Disclosure Project (CDP), when it was included in the “Climate A List” leadership category in the Climate Change edition and recognized by the international consultancy Carbon Clear as one of the leading companies among the Ibex 35 companies.

Ferrovial is committed to implementing the recommendations of the Task Force on Climate-Related Financial Disclosures (TCFD).

These recommendations are considered a turning point that will accelerate the economy with low emissions.

Ferrovial maintains an active position with the most relevant stakeholders, highlighting those that are or may be involved in the main climatic risks of the company’s activities throughout the world.

To facilitate this, the company is involved in several think tanks and influence groups at European level to discuss the future of the economic and environmental agenda for the 2030 and 2050 horizons. These include the Corporate Leaders Group (University of Cambridge Institute for Sustainability Leadership) and the EU Green Growth Group (platform formed by representatives of the business world, members of the European Parliament, governments and commissioners).

In the field of climate innovation, since 2017, Ferrovial has been a co-partner of the Climate-KIC, the largest European public-private innovation initiative created by the European Institute of Innovation and Technology (EIT) focused on mitigation and adaptation to climate change, either by carrying out innovation projects or by accessing the network of entrepreneurs articulated by the Climate-KIC.

In Spain, Ferrovial chairs the Spanish Green Growth Group (GECV) that promotes public-private collaboration to advance in mitigation and adaptation to climate change, the decarbonization of the economy and the promotion of a circular economy.

Along the same lines, the company is a member of the Fundación Empresa y Clima, a strategic partner in the #PorElClima Community, which promotes the Spanish Platform for Climate Action for public-private collaboration, presented in the framework of the Bonn COP, supports the Marrakech Alliance to contribute to a green and decarbonized economy, and participant in the Cluster of Climate Change promoted by Forética.

The circular economy is an important element as a new economic model in the fight against climate change. Therefore, Ferrovial has supported the Pact for the Circular Economy promoted by the Ministries of Agriculture and Fisheries, Food and Environment and Economy, Industry and Competitiveness that mainly promotes the reduction of the use of non-renewable natural resources, reuse of waste as raw materials, recycling, incorporating ecodesign criteria and public awareness.

Under this scope, a Circular Economy Working Group has been set up internally to identify and promote opportunities to transform the waste generated and managed into raw materials or secondary fuels that can be used in works and infrastructures designed, constructed and operated by Ferrovial.

The calculation and reporting of the carbon footprint is applicable to the entire company and covers all business areas and subsidiaries. The calculation method is based chiefly on the GHG Protocol (WRI&WBCSD), which is the most internationally accepted approach, while also adhering to ISO14064-1 standards. The market-based method was used to calculate scope 2.

The fulfillment of the proposed target is being carried out based on the implementation of actions to improve energy efficiency in buildings and processes, in the incorporation of sustainable criteria in purchases, in leasing of vehicles and machinery, in the design of sustainable mobility plans, and in the promotion of the purchase of electricity from certified renewable sources. Along these lines, in 2017, 36.04% of the total electricity consumed came from renewable sources, with 94.08% purchased and 5.92% from self-consumption. 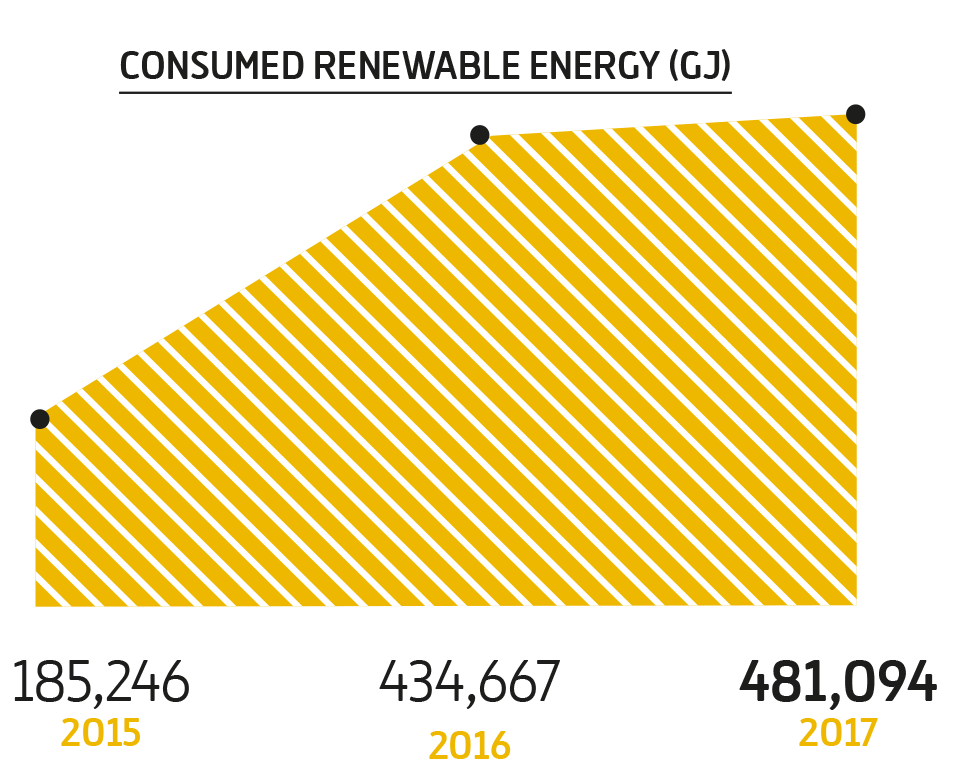 Since 2009, and thanks to internal plans, scope 1 & 2 emissions have been reduced by 1,202,451 tCO2eq, a figure similar to the annual emissions of a city of 174,136 inhabitants. In 2017, the consumption of renewable electricity prevented the emission of 39,247 tCO2eq, and the emissions avoided thanks to the sorting and capturing of biogas in landfills amounted to 1,389,171 tCO2eq.

Through the “Ferrovial, Natural Capital” program, Ferrovial carries out several biodiversity projects for not only assessing and mitigating the impact on natural spaces or ecosystems affected by its activity, but also anticipating market trends and, if applicable, making the most of any new opportunities in this field. At the end of 2016, the Natural Capital Protocol was made public, the first international standard that aims to make it easier for corporations to internalize risks and opportunities related to biodiversity and natural capital. Ferrovial had anticipated this process by incorporating the “No Net Loss of Biodiversity” criteria in its policy by developing tools to measure the company’s impact on biodiversity, in collaboration with various scientific institutions (CSIC, Universidad Rey Juan Carlos of Madrid, University of Salamanca).

The development of these tools was completed in 2017, and their reliability was validated in some infrastructure projects. This initiative has served as a case study and has accelerated the entry of Ferrovial into the Natural Capital Coalition, the promoting entity of the protocol.

Meanwhile, the company maintains its lines of collaboration with the Spanish Enterprise and Biodiversity Initiative (http://ieeb.fundacion-biodiversidad.es/), and the Global Change Monitoring Network, of the Ministry of Environment (MAPAMA). 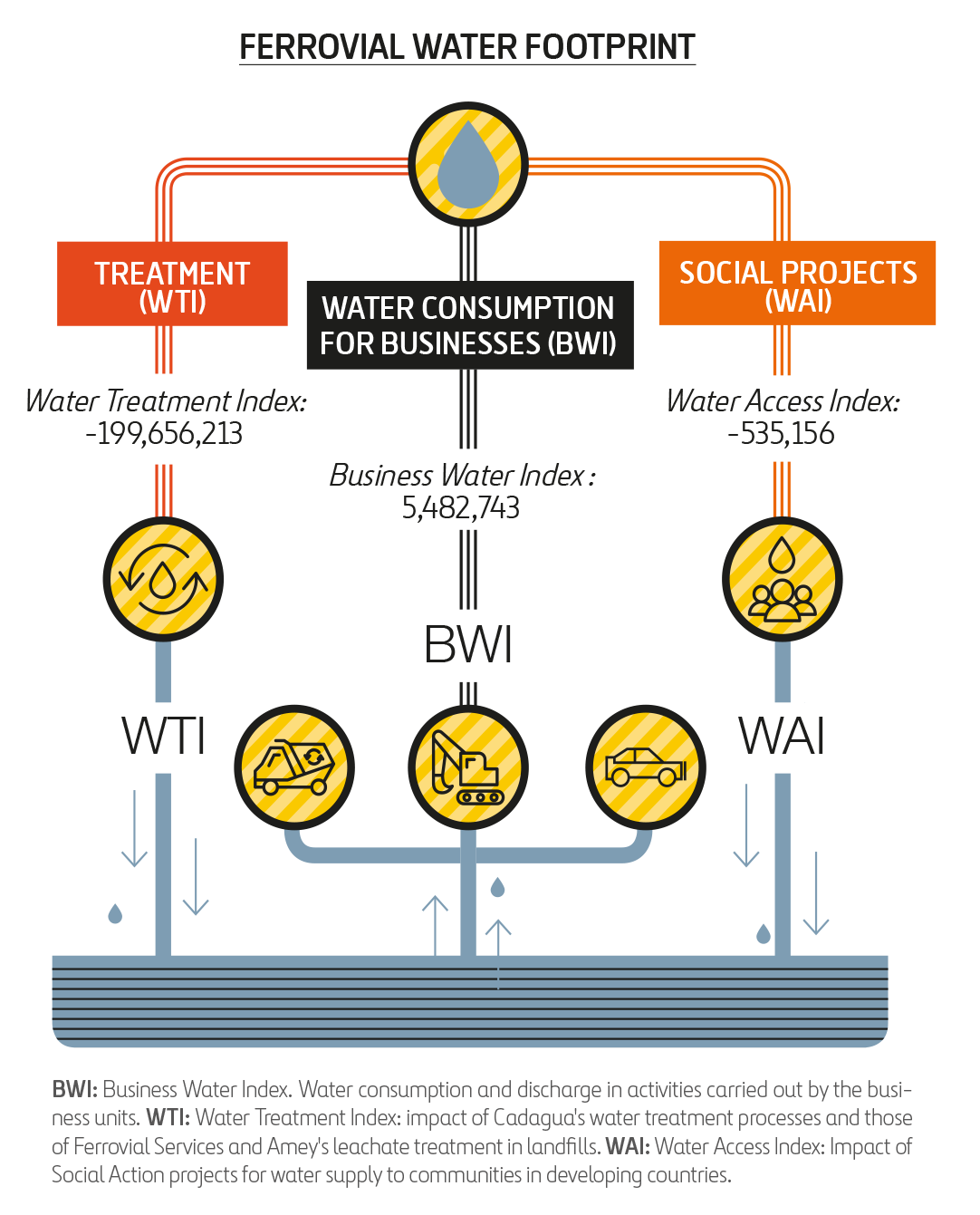 Ferrovial is the first company in its sector to establish a methodology to quantify its impact on water resources. It is based on the principles of The Water Footprint Assessment Manual (WFM), the Global Water Tool (GWT) and GRI-G4, and considers aspects such as the country’s water stress, the impact on water resources (quantity and quality) and the accessibility to water. More information on water footprint at www.ferrovial.com.

The high volumes of lands managed on site have motivated Ferrovial to establish an objective of reusing them, seeking to minimize the impacts associated with this activity. For this reason, an 80% target for land reuse has been established for 2020, considering 2015 as the base year.

The company has also reduced the production of non-hazardous waste, reaching the target of a 2.5% annual reduction, taking 2016 as the base year.

*The non-hazardous waste in 2015 and 2016 have been recalculated taking into account the contribution of the new companies acquired in order to improve the comparability of the data.

Ferrovial has joined the SBTi initiative that promotes the action of the private sector toward a low emission economy. A proposal that follows the recommendations of scientists and aligns them with the targets to reduce emissions required in the different temporary timelines. Ferrovial is the first company in its sector and in the world to set reduction targets aligned and validated by this initiative. SBTi collaborates with the United Nations Global Compact, CDP, World Wildlife Foundation (WWF) and the World Resources Institute (WRI).

In 2017, a tool was developed to implement a carbon price in the most relevant investments of Ferrovial in the shadow pricing modality with the aim of quantifying the associated risks and opportunities and guiding the asset portfolio to decarbonized business models. The methodology establishes the evolution of the long-term carbon price (from 2020 to 2050), in the main sectors and in the 15 most relevant geographies, making it possible to quantify the risks and opportunities of new investments. It also includes an analysis of the current carbon prices, the optimal prices to be able to meet the decarbonization target of the Paris Agreement and the path of compliance in each of the countries.