FERROVIAL AGROMAN IS ONE OF THE WORLD LEADERS IN THE CONSTRUCTION OF MAJOR TRANSPORT INFRASTRUCTURES. IT IS ALSO RECOGNIZED FOR ITS ABILITY TO EXECUTE ALL TYPES OF CIVIL ENGINEERING, INDUSTRIAL, BUILDING AND WATER PROJECTS.

Ferrovial Agroman focuses its activity on the international market, which is 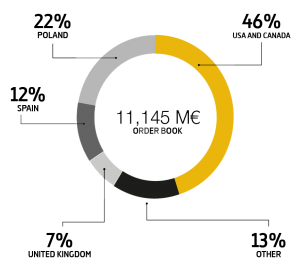 characterized by a strong competition from global construction companies and local companies. Its differential

strategic approach with other competitors concentrates the activity in large selected countries, with developed economies, a firm commitment to modernize their infrastructures and large projects that are technically and administratively complex. These countries offer a tangible and growing pipeline of more than 150,000 million euro.

In key markets in the USA and Canada, there will be a strong increase in investment in transport infrastructures, especially in privately financed projects where Ferrovial, with Ferrovial Agroman as the constructor, is one of the leaders. The support of the Federal Governments and the growing investment initiative of the states/provinces will give continuity to major awards such as I-66  Toll road (Virginia, USA) for 1,900 million euro, the largest of 2017 for Ferrovial Agroman.

Poland continues to present a favorable outlook, with the recovery of the civil works bid in 2017 and the Government’s extension of the provision and execution period of the long-term investment plans in roads and railroads.

In Spain, although activity continues to slow down with only a certain improvement in private construction, the Government’s launch of the Extraordinary Plan of Investment in Roads, with an expected investment of 5,000 million euro, means that the future can be faced in a more positive light.

Exceptional and complex projects, with broad diversification between sectors. The company specializes in highly technical projects, standing out from its peers through the experience and international presence of its Technical Office, focused on the search for optimal engineering solutions for each client and project. Among other milestones, in 2017, the tunneling works were completed at the Northern Line Extension of the London Underground, for which the Ground Engineering Award for technical excellence has been received for the improvements in cost and safety compared to conventional methods.

The sectorial diversification of Ferrovial Agroman makes it possible to undertake very different types of civil, industrial and building projects, expanding the potential market. As shown, in 2017, Budimex, which was already the overall leader in road construction in the sector in Poland, managed to position itself among the main railroad contractors, with the award of six large contracts worth over 500 million euro.

Selective internationalization. The international focus is on increasing presence in markets of the USA, Poland, the United Kingdom, Australia and Canada, as well as Spain, the home market, persevering with the strategy defined in recent years. It is also present in stable countries in Latin America such as Chile, Colombia and Peru, for large projects in which differential added value is generated.

Based on this strategy, bidding is avoided in new countries of lower interest, except for exceptional one-off cases in projects with limited competition and risks, together with local leaders and in OECD countries.

The strong investment in infrastructure and good profitability obtained by the company motivated Ferrovial Agroman to increase its commitment to the USA, doubling its order book in 2017. The awarding of a section of the Grand Parkway bypass in Texas for almost 800 million euro, where Ferrovial Agroman and its subsidiary Webber are leaders in civil works; I-66 Toll road in Virginia, and the remodeling of the Denver Airport terminal in Colorado for more than 500 million euro are all noteworthy.

Risk management, financial discipline and cost control. The Construction business is characterized by high volumes and tight margins, so correct selection of projects and optimal risk management are key, both at the bidding and execution stages. In the first phase, countries with legal certainty are chosen, with projects where competitive advantages and expert partners can be a determining factor, limiting errors in price, deadlines and contractual conditions, which are difficult to mitigate subsequently in the execution phase.

Cost control and planning of the project is essential at Ferrovial Agroman. It has developed proprietary tools such as the InSite project management system, which provides quick and flexible control, with the necessary level of detail.

Ferrovial Agroman has maintained a high profitability in EBITDA in recent years, with a high cash conversion. In 2017, due to the execution of projects in the initial phases, the lower weighting of toll road concession contracts, market competitiveness and the impact of two projects already completed in Colombia and the United Kingdom, EBITDA has fallen to 4.3%, which remains favourable. In the future, the usual strategic discipline will be maintained, redoubling, if possible, the effort in a correct selection of projects and preserving the criterion of concentrating on profitability versus volume.

Clients: integrated approach. The collaboration with the rest of Ferrovial’s businesses, due to the high technical complexity of the projects in which it is jointly tendered, allows us to offer an integrated solution that provides added value for clients, maximizes the competitiveness of the bids and facilitates compliance with the profitability and cash management targets.

In addition to the relationship with Cintra, there are growing opportunities with Ferrovial Airports, such as the award in 2017 of the remodeling of the Jeppesen terminal at Denver International Airport, which will cover more than 70,000 m2.

Innovation as a motor for continuous improvement. Ferrovial Agroman participates in various research projects with prestigious institutions such as MIT, the European Institute for Technology, the CDTI and the European Commission.  The latter finances the Transforming Transport project of the Horizon 2020 program, which will improve the mobility and logistics models through the use of Big Data, applied by Ferrovial Agroman in the Córdoba-Málaga high-speed rail corridor. The ACCEPT Project is noteworthy due to its application in the execution of works. Its multi-device technological platform, which includes smart glasses, will make it possible to control the production process in building works.

Employees: talent management. The essential factor for success is the human factor. The company stands out due to the experience, mobility and professional value of its teams, adding local and technical know-how with new contracts. Therefore, Budimex has been recognized as the Responsible Employer of 2017 for its human resources and talent management policy. It should be noted that two Ferrovial Agroman engineers were awarded Best Women Contractor and Best Young Women in Construction at the 2017 European Women in Construction Awards.

Society: quality, safety and environmental impact. Commitment to quality, the community and the environment is a priority, with various public recognitions such as those received by the two largest toll roads in execution in Australia: Warrell Creek with five Australian Business Awards for Innovation and Sustainability, and Towoomba with the “Land Routes” Power of Works and Projects award.

Ferrovial Agroman believes that new standards of performance, technology and safety measures can be developed through innovation, contributing to the achievement of the Target Zero accident goal. In 2017, Webber was awarded by Associated General Contractors of America for its safety record in Texas.

LEADER IN THE IMPLEMENTATION OF BIM TECHNOLOGY

Ferrovial Agroman has implemented this work methodology in all the geographical areas in which it has a presence, applying it to different types of work, both in construction and civil works, enabeling the integral management of the life cicle of buldings and infrastuctures. Crossrail Farringdon, Northern Line Extension, Thames Tideway and the Harwood Bridge are good examples of the successful use of BIM (Building Information Modeling) in highly complex projects.

It should be noted that Ferrovial Agroman Australia has been certified by the British Standard Institute (BSI) in the use of BIM Level 2, thus following the strategy initiated in previous years by the United Kingdom, where the use of BIM is mandatory for public works projects in terms of certification. 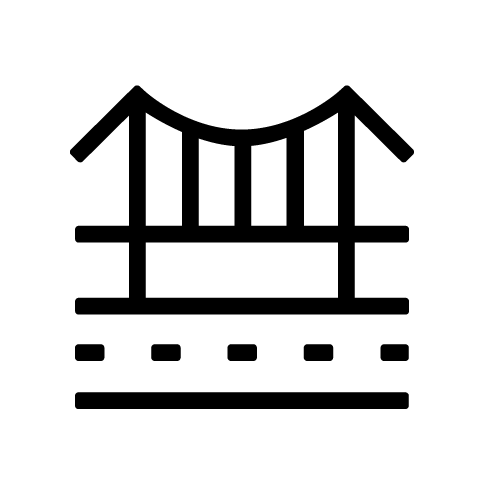 The project consists of the design and construction of 85 kilometers of the Grand Parkway in Houston, the largest urban bypass in the US, for 790 million euro. The client, Texas Department of Transportation, will manage it as a toll highway after the completion of the work. Its execution represents a unique technical challenge, with 74 new bridges, 7.5 million m3 of  land moving and the relocation of connections for 10% of the total budget, after expropriating 375 plots in a planned period of two years. 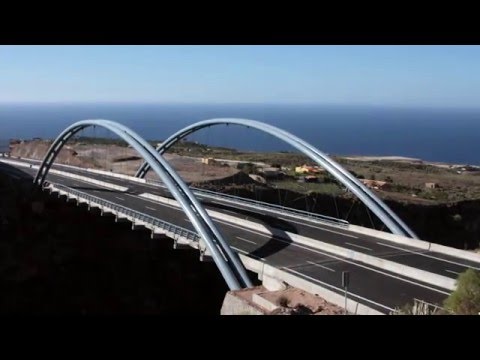